The Photovoltaic-Optimizer AD-PVO 4000 monitors the supply of solar energy at the main connection of a building. The device has an Ethernet interface, with the aid of which the stepless controllable heater rod of my-PV ”AC ELWA-E” or the PV-Power-Manager "AC THOR"can be started. The device communicates with the devices rod via the Modbus-TCP protocol. There is also a WEB-interface available, with the aid of which the AD-PVO 4000 can be parameterized or measuring values can be read off. The device can also be integrated into the home network with an Ethernet cable, and, depending on surplus power, starts the stepless heater rod or the PV-Power-Manager "AC THOR" with exactly this and regulates the zero feed at the connection to the building. The device also has an RS485 interface, to which the compatible display AD-MM-400 can be connected, or all measuring values are also available with the Modbus-RTU protocol. With this it is possible to display the measuring values directly on site as well as at a greater distance. The device converts the energy on site optimally to immediately available warmth and is not fed back into the public low-voltage network. Through this, the PV units are optimised for own consumption and the public low-voltage network is relieved. It is recommended to mount the AD-PVO 4000 directly after the counter of the energy supply in the distributor cabinet, as measurements should be taken as close as possible to the feed point. The device requires all three outer conductor voltages and the neutral conductor for its measuring. The AD-PVO 4000 measures the current via three external fold-over current transformer, which can be mounted, space saving (without separation), directly onto the 3 phases after the counter. The Photovoltaic-Optimizer obtains the own supply energy from the measuring voltage L1. 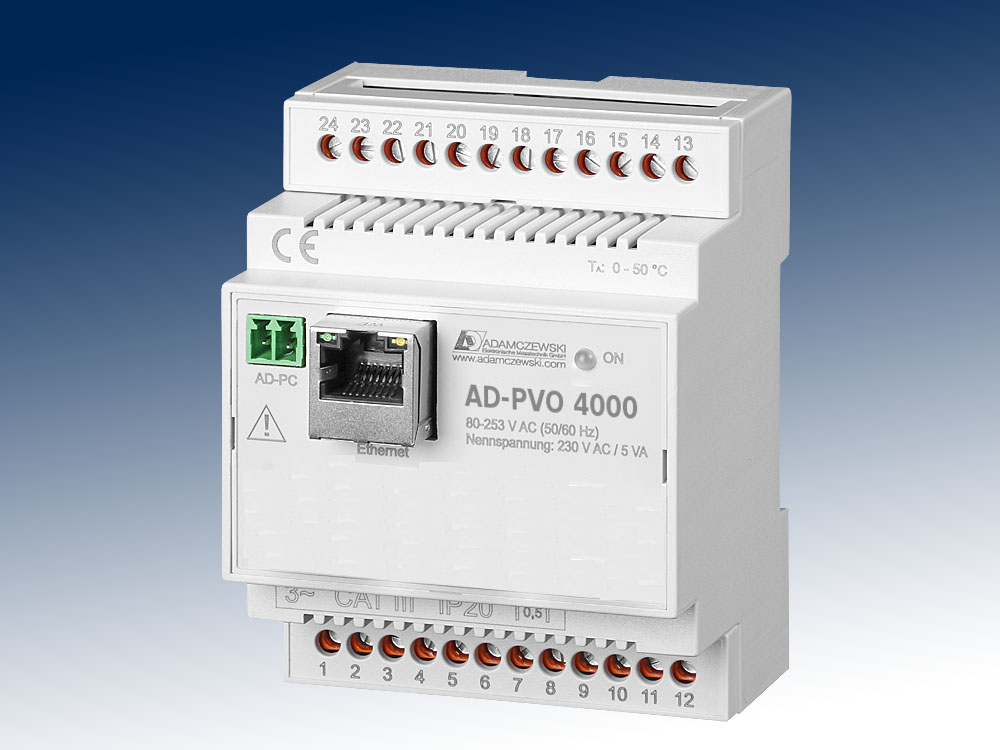 Stepless control of the heating element of my-PV "AC ELWA-E" or the PV-Power-Manager "AC THOR" via Ethernet and the Modbus-TCP protocol.